The Secret Life of Pinewoods’ Pianos

The pianos of Pinewoods Camp live a unique life. The usual habitat for a piano is a parlor or living room in a private home, a community hall, or perhaps a church sanctuary or concert hall. In all these places, they are sheltered from the elements and may even enjoy air conditioning in the summer.  Pinewoods pianos, on the other hand, spend their summers essentially out of doors in the woods, and spend the winter tucked up in the camphouse or in Pinecones, stuffed with mothballs (to deter mice from nesting in them) and listening to the wind blowing through the pines.

Have you ever wondered why the acoustic pianos at Camp have signs on them that read “Please do not unplug the piano?” It’s because the pianos have dehumidifier rods in them valiantly trying to counter the effects of the local microclimate, formed in a pine forest between two ponds, on the wooden mechanisms inside the piano cabinet.

The “uncontrolled environment” at Camp means that, despite the dehumidifier rods, our pianos require the frequent attention of a piano technician both to keep them in tune and to make repairs. Furthermore, the piano in the C# dance pavilion is played many hours each day—probably only a piano in a conservatory practice room gets as much use – and so the cycle of normal wear and tear is accelerated.

Pianos in a private home might go years between tunings but the Pinewoods pianos get tuned at least once per week during the summer. The pianos in the C# and C# minor bandshells also get moved to the camphouse in the fall and then back to the bandshells in the late spring.

Over the years since Pinewoods’ incorporation in 1975, our pianos have been well looked after by four different technicians. Here’s a little bit about them.

John was a work weekend regular from the 1970s into the 2000s. In addition to being a trained piano technician, he was also an ethnomusicologist trained at Wesleyan, who learned to pilot a small plane in order to carry out his fieldwork in Papua New Guinea. It’s not clear how he got connected to camp—I don’t believe he was a dancer. Jacqueline Schwab, camp manager in the 1980s, thinks he may have known Gerda from the days when the Conants lived in Hartford.

Louis Gentile, of Quincy, MA, has been moving Pinewoods’ pianos faithfully every fall and spring since at least the 1980s. Also a piano technician, he specializes in restoration of player pianos.

Louis says the Pinewoods moves are a marker for him of the change of seasons. He comes with a small Toyota pickup truck with a lift on the back and a couple of dollies, and moves the two uprights from C# and C# minor in hardly any time. He often comes with an assistant, but I know for a fact that he has done the job alone on at least one occasion. The right tools can make just about any job easy!

Louis thinks he got connected to Camp because he moved a piano for Jacqueline Schwab when she lived in Cambridge. His memory is uncertain, but in addition to moving the pianos twice a year, he may have also tuned them for a time in the late 70s and early 80s. 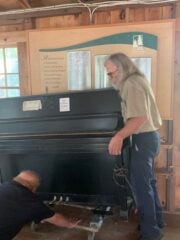 Ann began tuning for us in the early 1980s. She and Louis were mentored by the same older piano technician, and Louis is likely to have referred her to us.

Ann was our most local tuner, having gone to high school in Plymouth. She later lived in Carver and Middleboro and had a career as a church musician.

Sadly, Ann died suddenly in March of 2000. We were naturally quite anxious about finding another tuner in time for the camp season. It was a great relief when Chris Brown, who had substituted for her numerous times when she attended an annual church musicians’ conference, agreed to drive down from Cambridge for a regular tuning gig.

Chris Brown, a technician and concert pianist, began tuning at Pinewoods regularly in the summer of 2000 and continued through 2019.

There was no piano tuning, alas, in 2020, as Pinewoods was closed because of the COVID pandemic. PCI Executive Director at the time, Carl Mastandrea, realized that Chris was likely to have been hit hard financially by the loss of the work, as were many musicians and other gig workers affected by the pandemic shut down. In response, Carl offered to teach an online photography class for the Pinewoods Community.  He requested donations for the class, a portion of which would be given to Chris. In the end, Carl was able to send Chris $1,000, and reported that Chris was incredibly touched at the generosity of Pinewoods campers, most of whom he had never met.

Tragically, Chris was killed in a car accident in the fall of 2020. 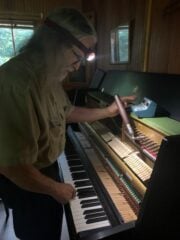 Louis starts work very early in the morning, and on tuning days he can often be found in his truck in the Pinecones parking lot, having finished turning all the other pianos and waiting patiently for the 5-minute breakfast bell to ring. He has adopted this as the signal for when it is “safe” to start tuning the piano in the Pinecones living room – if anyone is still sleeping, he’ll just be helping them not to miss breakfast!

The sounds of the pianos being tuned were always a soothing background to changeover days for me in my years as manager and Executive Director (1994 – 2002). I hope that those campers who read this will take a moment, when next they are dancing to music played on one of our trusty pianos, to reflect on the faithful behind-the-scenes work that keeps our pianos, under less than ideal conditions, always ready to produce beautiful music under the skilled hands of our community’s fine pianists.