To view historical photographs and antique postcards from Pinewoods Camp, visit the Photo Gallery; or view the history of Pinewoods preserved in our archives at the University of New Hampshire.

When Helen Storrow founded Pinewoods Camp in 1919 she launched a lasting tradition. As the oldest continuously operating facility for traditional dance and music in the United States, Pinewoods attracts enthusiastic participants from throughout America and around the world. Its history is rich and deep. Founded by Helen Storrow, nurtured by the Conant family, and finally purchased through the donations of its own campers to form Pinewoods Camp Inc., Pinewoods has been continuously maintained to foster the love of music, dance, song.

Helen Storrow and the Girl Scouts

Helen Osborne Storrow was a Boston philanthropist and an active supporter of the Girl Scouts movement. In 1917 she founded the first National Girl-Scout Leadership Training School at the Winsor School in Boston. In 1919 she moved the school to her property on Long Pond. The Camphouse was built at this time, and the camp was named “Pine Tree Camp” after the Pine Tree Patrol system. The Girl Scout programs continued to be held there until 1935, at which time they were moved to a different property nearby, and the name was changed from Pine Tree to Pinewoods Camp.

The Transition to Dance Camp

Mrs. Storrow was also involved in the growth and development of English country dancing in the U.S.A. and was president of the “American Branch of the English Folk Dance Society” from 1916 until her death in 1944. At Pine Tree Camp, she combined these two passions by inviting the staff of the American Branch to teach English Country Dance and the Morris to the Girl Scouts. Dancing always remained a part of the program.

In 1925 and 1926, the Boston Centre of the Branch, acting somewhat autonomously, persuaded Mrs. Storrow to let them hold its own summer school at Long Pond. It was at this time the dance pavilion C# was built – named in tribute to the founding father of the English folklore revival, Cecil Sharp, who had recently died. It wasn’t until 1933 though, when Mrs. Storrow offered the camp to the American Branch as a permanent home for their summer school, that the true nature of Pinewoods Camp took hold.  Dance camp continued to be run by the American Branch, until that organization was dissolved in 1937. At this time a new national society formed in its place. New York was its designated center, and its name eventually became the Country Dance and Song Society. CDSS subsequently directed the adult dance program each summer under the leadership of May Gadd. “Gay”, as she was called, was a teacher and organizer sent from England to America by Cecil Sharp; she was devoted to maintaining the high standards set forth by EFDS. Classes were assigned by skill level and attendance was required for each class. Also in 1933, the care of the property itself was turned over to Lily Conant, who had been Mrs. Storrow’s very close friend ever since she arrived in America. Lily had been sent by Cecil Sharp in 1915 as a teacher of English Country Dance and Morris for the American Branch. When Helen Storrow died in 1944 she bequeathed the camp to Lily and her husband, Richard Conant. 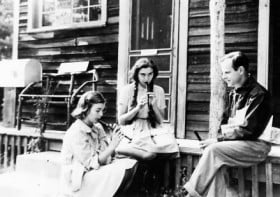 During the subsequent 31 years, the Conants ran the dance camp as a labor of love, often with a deficit and always with very little money available for capital improvements or maintenance. During this time CDSS expanded its programs to include a folk music week and a chamber music week. The camp was also made available to other non-dancing groups, and some of the houses were rented out to families for summer vacation use. The Pilgrim Fellowship held retreats and workshops there for teenagers, and for 30 years Richard Conant hosted a social-workers weekend called the Pinewoods Institute.

The Purchase of Camp and Birth of PCI

With the death of Richard Conant, Sr. in 1975, the property went to his son, Rick.  Not wanting the continuous struggle of maintaining camp, Richard Conant, Jr. encouraged the creation of a non-profit organization to which the camp could be sold. Pinewoods Camp Inc. (PCI) was subsequently formed, and proceeded to raise the necessary funds for the purchase of the camp property. A major campaign was conducted to raise the funds from the campers themselves. For over a year, auctions, dances, raffles and bake sales were held, and personal donations solicited. The enthusiasm was intense and contagious. In 1976 the transfer was completed. $180,000 was raised – $100,000 for the camp and $80,000 for maintenance.

PCI’s Board of Directors was constructed to represent the three then-current user groups (program providers), with the majority from CDSS as it was the largest user of the camp. Also included was a Conant family member, a Six-Ponds-area neighbor, and four At-Large directors. (A representative of The Folk Arts Center was added in the 1990s.) The first camp manager hired by PCI was Gerda Conant, wife of Richard, Jr., and so a seamless transition was made. The first task, after the purchase, was to set about attending to the many years of deferred maintenance.

The Folk Revival of the 1970s was a boon for Pinewoods Camp. By 1983, CDSS had expanded its offering to seven weeks. Dance Week I and Dance Week II became English Week and English and American Week. A Family Week was added to have dance and music programs for children of all ages, and an American Week to explore those traditions in depth. Folk Music Week was always full, and Chamber Music Week continued to be well attended. CDS – Boston Centre extended its weekend to a four-day session over July 4th weekend. The Scots, likewise extended their weekend. By 1977, it became clear that camp could be filled for the entire season. The Folk Arts Center joined with its offerings in International dance, and a Labor Day Weekend run by the Boston Centre was added, with informal classes taught by campers, and with more diverse activities offered. This model was so successful that when an extra week was available in the 1980 season, a session was created called Campers’ Week. Three years later this week was absorbed by CDSS. Extensions of existing sessions were created to fill the empty weekdays: the Scots joined with the Boston Centre to combine the Scottish and English traditions and FAC added Folk Days. And a few years later, a First Weekend was added (currently named Swing into Summer), which follows the Labor Day model. Dance, music and song programs filled the camp all season, supporting the huge surge in Morris dancing, contras, “old-time music”, and all forms of traditional dance, music and song. 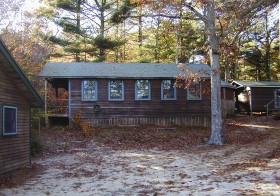 Now – with the help of continued donations, including a major Capital Campaign – there are new camper cabins, bathrooms, septic systems, electrical upgrades, a rebuilt Camphouse, renovated dance pavilions, Manager’s Office, Program Center, and rebuilt kitchen. The caretaker has a new workshop and a new storage barn. The job of Camp Manager has grown into that of Executive Director, and the Board has expanded its committees three fold. 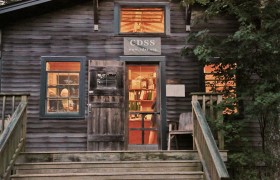 The new user office at night

Throughout all of this, PCI has remained committed to maintaining its current capacity of 140 campers, to expanding its buildings’ footprints with thoughtful caution, to carefully designing/renovating structures so that they blend into Pinewoods Camp, and to preserving the pristine environment of its unique area. And, as in the beginning, it remains deeply committed to the continuation of traditional music and dance programs for future generations.