Pinewoods is a special place – a rustic oasis in a pristine environment, bringing us back to another time, and creating a magical escape from our current technological lives.

Many of Pinewoods’ structures date back to their original 1930s construction, with a few modest renovations.  In the last three decades, several buildings have been added and a few enlarged – cautiously and sensitively – to maintain the character that so uniquely expresses Pinewoods. Because of the care we’ve given to our site, we are very proud to be listed on the National Register of Historic Places. 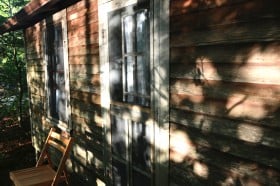 Pinewoods Camp consists of many simple, wood-sided buildings. Many of the cabins and the two houses are original, as is the Dining Hall. But the major ones – the Camphouse, the dance pavilions, the Manager’s Office, Program Center/Office, and most recently the Kitchen – have been enlarged and renovated  to better accommodate the needs of today’s campers. Additional cabins have been added; shower houses and bathrooms now stand near the old outhouses. Septic systems have been added and upgraded. All blend magically among the gentle hills that rise and dip between the two ponds. And at first glance, camp looks as if nothing has changed in the last 35 years. 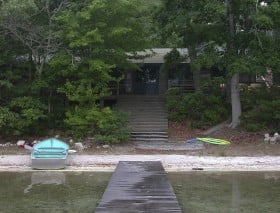 The hub of camp centers near the Camphouse. The paths converge here, much like an Italian piazza – only they are made of sand and pine needles rather than granite setts. The sun shines down through the clearing, encouraging people to pause and chat for a moment. The Camphouse, down a set of steps, is the place for camp gatherings, socializing, some classes, and for just passing through on the way to the water.

Close by are the Program Center, which is the office used by the Program Providers during most sessions; the Executive Director’s (Manager’s) Office; the Campstore for snacks; the Changing-rooms for swimming; and the Bookstore, where you can buy music and other items offered by the Program Providers. Broad steps lead down from the Program Center and act as an amphitheater for a sandy square – formed on one side by the Camphouse, on the opposite side by the dance pavilion Ampleforth, and, across from the steps, the pond peeking through the trees. This open spot is often used for afternoon teas or performances – a natural gathering place for many community events. 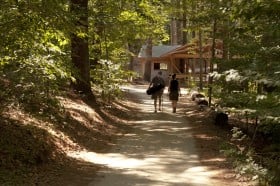 Two of the dance pavilions, C# and C# minor, are within short walking distance. A long wooded path parallels the waterfront and connects to the Dining Hall, which has a large open area in front for games, performances, or just spontaneous conversations and activities.

The fourth pavilion, Newbiggin, is near Round Pond. Also on Round Pond are the two houses as well as numerous cabins in an area called The Highlands. Other cabins are scattered around camp in loose groupings, some of them bearing the names of  an English ritual tradition or a dance. Paths through the woods connect them all, often with music and laughter filtering through the trees.