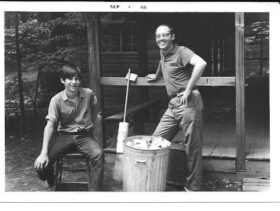 “Duncan, Arthur, and ‘Friend’ 1968” – with Art Cornelius outside C# Minor. Emptying that barrel full of cans, ideally while a class was in session with as much noise as possible, was a highlight of the trash and john run.

I am living in the hills 30 miles southeast of Melbourne, Australia. I came to Australia to try it out for a year in 1991 after a backpacking trip through New Zealand, Australia, and parts of Southeast Asia in 1990. My year has turned into nearly 30! At first I lived with my now ex-wife, and from 2004 as a single parent to my now 22 year old son Carter, who moved out in May this year, so I am now on my own, with a cat.

I first came to Pinewoods in 1967, for Chamber Music Week. I was 15. Even though I was underage for that adult week, I was given special dispensation because I had a small harpsichord that I was happy to bring to camp. I had known about Pinewoods my whole life, and at the end of that first week I basically begged the Conants and my parents to allow me to stay on for the rest of the summer, which they did! I started as pot boy (it meant something different in those days!) and graduated to some outdoor crew activities. For the next 3 years (1968 through 70) I was on the crew in various capacities.

I grew up in a dancing family. My father Alan was a New England square dance caller starting in the 40s when he was at MIT and had a performance team and band that toured the Northeast. Dad learned calling from Ralph Page, and became very involved in the New England Folk Festival Association, which we attended every year. Sometime around 1950 my parents helped create the Scottish dance scene in Boston, so I’ve been dancing since before I was born.

This hasn’t influenced my professional life so much, but personal/social, absolutely! I took my first official Scottish Country Dance class in 1960 with Barbara Little, and have continued dancing ever since with a brief hiatus when I was in college and a bit less activity in recent years. I became a SCD teacher in 1976, and a dance musician in about 1980. Having picked up other traditions at Pinewoods (English, Contra, Square, Kentucky Running Set) I’ve continued to dance, teach, and play in whatever traditions are available. The scene is a lot smaller and very socially different in Melbourne (people do SCD because they’re Scottish, not necessarily because of the dance – what a concept! Bear in mind growing up in the RSCDS Boston Branch there were very few if any actual expat Scots – just a lot of people like my parents who liked the dancing), and I’ve wound up spending more of my time here as a musician– there are plenty of dancers, plenty of teachers, but few dance musicians, so guess what I get asked to do most? If I had to choose between the three, being on the dance floor would always be my first choice. These days I do a little contra calling, occasional SDC teaching, and enjoy dancing a mix of Scottish, English, Welsh and “colonial” dances.

Duncan’s entry is a submission from a two-week adventure in September 2020. It started with requesting help with a memory about Pinewoods Camp from 1968. The POST editor, Marney Morrison, emailed a half dozen people who had been there at the same time.  Those friends shared the email, and for days anecdotes and laughter traveled over the internet, until someone offered to host a Zoom reunion.  Forty people met for two hours, using a set of guidelines designed by storyteller and writer Meg Lippert, for one-minute introductions. After they heard from everyone they continued with conversation and more storytelling. Between them, their first year at Pinewoods ranged from 1947-1974, and they were living in Hawaii, across the Continental USA, and in Australia.  As these poured in, they realized that Pinewoods would want to invite EVERYONE who has been to Camp to tell their stories. Fast-forward to now and Pinewoods is eager to hear from YOU. Click HERE to submit your story or email .