An Interview with Gerda Conant

In Celebration of Women’s History Month

I met Gerda Conant in the sunny front room of her Milton, Massachusetts two-family house. Our conversation lasted until the bright early spring sun had set over Boston.

Gerda Ruden was born in Krefeld, Germany and lived in Freiburg. Her father was expected to follow Gerda’s grandfather into the family silk tie business, but the political climate in Germany in 1935 and his outspoken manner was such that he moved his family, including Gerda’s American-born mother, to the USA. Gerda distinctly remembers seeing the Statue of Liberty and the Empire State building from the deck of their ship as the family finally arrived in America. 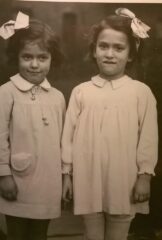 Gerda, her sister and their parents settled in rural Long Island, “in a cottage not too different from Pinecones, although a bit smaller.” The family kept chickens, grew vegetables, and did a lot of canning. Her father, after trying various business ventures during the World War II economy, opened one of the first laundromats on Long Island, and her mother worked as a nurse and volunteered as a Girl Scout troop leader and trainer. As a child with two busily working parents, Gerda and her sister had wild berries and flowers, woods and fields, swamps and kettle ponds to explore, fortuitously preparing her for her Pinewoods Conant life to follow. “Clearly we were poor, but I never felt that way,” what with family singing of German and American songs around the piano, knitting, sewing, cooking and embroidering.

About her American growing up, Gerda says “although my family fled Hitler, they knew what happened to people in war. I became drawn to and acquainted with the Quakers. This led me to sign up for a service project through the American Friends Service Committee in a mental hospital in Iowa.” And it was here that Gerda met Rick Conant, in 1952. Rick, a student at Haverford College, was also on an AFSC project.

Gerda and Rick did not waste any time, marrying in 1953. Gerda had not even graduated from Ohio’s Hiram College, so Rick, a Conscientious Objector, cleverly arranged his alternate service in a mental hospital not far from the Hiram campus. Their evenings together were often filled with all kinds of folk dancing, further cementing her future as a vital participant in the evolution of Pinewoods Camp. 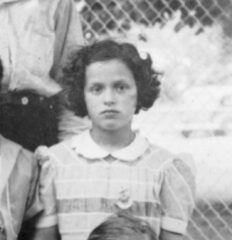 Gerda Conant as a grade schooler on Long Island

Upon first arriving at Pinewoods, Gerda clearly remembers watching the Thursday afternoon demonstrations, where the dancing was limited to English with an occasional American dance. She was amazed to experience a new side of Rick when he sailed his beloved pumpkinseed Redstart in the weekend races on Long Pond.  Rick was a perpetual winner, and his competitive side shown through in the local, low-stakes, neighborly weekend sailing events.

Gerda Conant played a crucial role in the transition from the Pinewoods Camp modestly and informally run by her in-laws to the Pinewoods Camp, Inc. of today. When her father-in-law Richard Conant first decided to turn Pinewoods over to a governing board, it was necessary to find someone who knew the workings of the grounds and buildings. No one in the immediate Conant family was interested in the position, so it fell to Gerda, who had just begun a career as a first grade teacher in Hartford, Connecticut, where she and Rick were living at the time. “They needed somebody who knew where the fuse boxes were,” she says. It was as a Conant that she managed the camp that first summer. Naturally, she hired her children. Gerda remembers her 7th grade daughter Susan didn’t see washing dishes as her ideal summer job. But sons Donald and David had previously worked on grounds crews, learning the ropes from crew chief Peter Liebert and crew members Nat Nichols, Tony Moretti and Hank Chapin, among others.

Those first summers were “seat-of-the-pants” operations in many ways. When the Square lights went out, it took 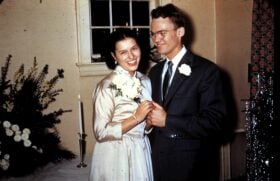 Gerda and Rick Conant on their wedding day

an hour just to locate the fuse box. The very first CDSS Family Camp is forever seared on her memory as the week it never stopped raining. Gerda remembers many cabin roofs leaked to the point where she announced in the dining hall, “Please let me know if your cabin does NOT leak.” One day the run-off from the road was so intense that the dining hall pump flooded, and she and David Arnold had to crawl under the dining room and construct a damn, diverting rainwater away from the pump.

Gerda credits a lot of her early successes to productive work weekends and eager, faithful, enthusiastic crew members. She gratefully acknowledges the Scottish dancer who single-handedly re-designed the wiring for the camp and then dug the trenches and laid new cable. Shag Graetz was also instrumental in the early transition days, with his care and knowledge of the camp grounds. Gerda feels there should be a tribute to Elgie Levin, who has attended every work weekend since they were instituted.

Gerda recalls with great delight the retirement party for the ancient Hobart dishwasher, planned by Mark Ward and Frank Edwards, where t-shirts were made commemorating the grand event. The work schedule in the early days wa

s looser than it is now, because Pinewoods was not booked every day of the summer season. There was time for the crews to jump in the back of the pickup truck and go to the movies in Buzzards Bay. In those days Gerda had to make sure she hired enough crew with driver’s licenses. Until Terry Tobias re-designed the dining hall kitchen there was not enough cold storage space. Some member of the crew had to make a daily drive into Plymouth for supplies and food.

Gerda owes her professional career as a property manager to her Pinewoods experiences. After Pinewoods she managed a housing complex in Newton, Massachusetts, and finally retired after running an apartment complex for the elderly on Beacon Hill in Boston. Now, son David’s family lives just down the hill, and Gerda can easily and conveniently slip into the grandmother/caregiver role in her neighborhood and return to the family cabins next door to C# in the summers.

Gerda managed Pinewoods “for four or five years,” during which time the Rick Conant family moved to Milton, Massachusetts from Hartford, Connecticut. She brought Jacqueline Schwab in as office manager, and when Gerda finally stepped aside, the natural choice for the next manager was Jacqueline. But Gerda had successfully transitioned Pinewoods into a viable organization, one that so many of us love to this day.